Larry and Diana Caillouet are now cruising in the Virgin Islands on their Beneteau 50, Mary Jewell, after placing on the podium in all three events of the 2016 BVI Spring Regatta and Sailing Festival. Mary Jewell took second place in the first event, the Nanny Cay Cup Around Tortola Race. The course consisted of a two hour upwind leg up the Drake Channel past Beef Island and Scrub Island, then a jibe onto a downwind leg along the Atlantic coast of Tortola. After rounding Brewer’s Point at Cane Garden Bay, the boats raced through the Thatch Island Cut, rounded Frenchman’s Cay, and sailed upwind in the Drake Channel again to the finish line. Although the course is approximately 28 miles, Mary Jewell traveled almost 39 miles to complete the course in 5 hours 18 minutes and 10 seconds. In addition to the miles added by tacking upwind, Larry and his crew followed a strategy of sailing well offshore on the north coast of Tortola to avoid the wind shadow from the mountains. Winds were fairly steady at 18-23 knots. Mary Jewell averaged over 7 knots with a brief top speed of 11.0 knots. The crew consisted of Larry, Richard Collins, and Dan Chaney, all of Bowling Green, and Bill Linehan of Indianapolis.

The second event was the Scrub Island Race from Nanny Cay on Tortola to the Scrub Island Resort and Marina. Mary Jewell took second place again behind the same team from the Netherlands who won the first race.

The third event was a three-day six-race regatta using a combination of islands and floating marks to create interesting and challenging courses. Except for the second race which was held during a howling rain storm, all the races enjoyed perfect BVI weather. Diana Caillouet and Ron Weiss joined the crew for the regatta races. After the first day of racing, Mary Jewell was in fourth place in the fleet of sixteen boats in the charter boat division. After the second day Mary Jewell was still in fourth place, 4 points behind the third place boat. In the fifth race Mary Jewell pulled a stunning upset and placed second, ahead of all three previous leaders, gaining three points to move onto the heels of the third place boat. However, in a controversial decision, the race committee voided the entire fifth race based on a protest against the course instructions, so Mary Jewell remained four points behind third place. The final race was in light breezes, not unfamiliar to Barren Lake sailors. Mary Jewell trailed her target, the third place boat named Thunder Girl, at the windward mark, but steadily pulled ahead on the downwind run to the finish to beat Thunder Girl by four places, earning a tie for third place. In the tie breaker, Mary Jewell’s first place finish in Race 3 awarded them the third place trophy.

At 7 years old, Mary Jewell was the oldest boat in the race and raced against mostly new boats with crisp new sails. In a champagne celebration onboard Mary Jewell after the regatta, Larry toasted “To Mary Jewell –the old girl can still shake it!” 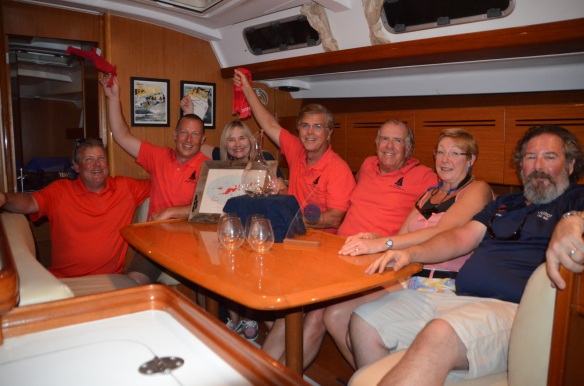 Dan and Larry waving the Red Towel while celebrating the win onboard Mary Jewell. Dan, Diana, and Larry are the three Hilltoppers in the race crew. Other crew members (left to right) are Bill Linehan from Indianapolis, Richard Collins from Bowling Green, and Marty and Ron Weiss from Stamford, Connecticut. The wine decanter and 4 crystal glasses are marked with the logo of the 45th BVI Spring Regatta, Third Place. The framed map of the British Virgin Islands is the award for winning Second Place in the Around Tortola Race. The trophy with the Lucite sailboat sitting on the table is the award for winning Second Place in the Scrub Island Race. 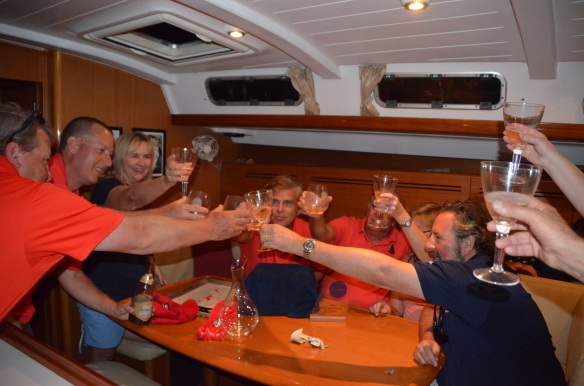