After three weeks at home we returned to Escapade in Providenciales, Turks and Caicos. We spent a day reprovisioning and doing the inevitable—installing equipment. We brought a new microwave oven with us, along with a new toilet pump for the aft head, a door latch for the forward head, and a fan to replace the one that died in the galley when it got soaked with a splash of seawater en route to Cartagena. We also brought two new crew—Richard, who had sailed with us on Escapade’s maiden voyage in the 2016 Bermuda Race, and Todd, who was new to the crew. We refueled and were ready to depart.

We left Providenciales the same way that we arrived—at high tide being led through tricky shoals by a pilot boat. High tide came at high noon, which was perfect for our first project. As soon as we cleared the slalom course exit from Provo, we dropped anchor in 20 feet of water. Just as we had anticipated, the hull had collected a small garden of sea life. Richard, Todd, and I were happy to jump into the warm and remarkably clear water to clean the hull. I had bought drywall taping knives and a painter’s multi-tool. Since I had scuba gear, I concentrated on the keel, propeller, shaft, and rudder while Richard and Todd worked on the hull and the bow thruster tube. It was fun to watch the scum, barnacles, and unidentified yucky stuff flying off the hull as we scraped. In fact, I think it was one of the most enjoyable dives I’ve ever had. A good time was had by all.

Since hurricane season had officially already started, we had some concern about the weather. It turned out that high wind was the opposite of the weather problem we faced. When we got underway there was barely a whisper of wind, so we motored away on a north-northwest course. We opened the mainsail to steady the motion of the boat and in hopes that it would add a half-knot or so to our speed, but it served mostly for decoration and to reaffirm our identity as sailors, not that other kind of boater. We motored all night, and all day, and all night, and all day. Norfolk is about 1000 miles from Turks and Caicos and Escapade has a calculated motoring range of 1000 miles on full fuel tanks, but we didn’t want to find out if that calculation was accurate. So we held the engine to a fuel efficient rpm and when the wind would occasionally make a contribution to our speed, we would reduce engine rpm accordingly.

Our doldrum days passed without incident. That gave us plenty of time to enjoy sunny days, starry nights, and round after round of storytelling. The storytelling well never ran dry and even when we made landfall the bucket was still full of untold stories. The sea became so flat and smooth it took on an appearance like oil and gave us the opportunity to see its true color, a gorgeous cobalt blue that was mesmerizing in its beauty.

After about 60 hours of motoring we finally found wind, or wind found us, and we added the genoa and the staysail to the main. The customary photos of the spinnaker flying gloriously will be missing from this report because we never had the right conditions to fly it. Too little wind, too much wind, or wind from the wrong direction denied any plan to use it, so we applied our sail trimming expertise to the other three sails—when we felt like it. Cruising is not racing and it’s easy to become complacent on long ocean passages. We discovered another incentive to not tinker with the trim of the sails too much. Any time we used the power winches to trim the genoa or the outhaul on the main, we lost our navigation instruments. Sometimes this included the autopilot and sometimes only the wind speed and wind angle readouts on the multifunction display. We had to reboot the instruments each time to get the readings back. We decided that this problem was related to the battery charging problems that we had been having ever since the new inverter/charger was installed in Dominican Republic. We also decided that there was nothing we could do about it out in the Atlantic, so we became very judicious in our use of the power winches. Still, with racing in our blood, we kept the boat moving pretty well. 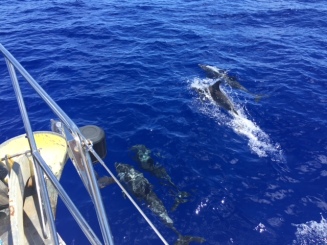 One day when nothing special was happening, I spotted a couple of dolphins a hundred yards out to starboard. I told everyone to get their cameras ready because they would be visiting us soon, and they did. Dolphins seem to love playing with passing boats, like dogs chasing cars, and they don’t get a lot of opportunities out in the Atlantic where we were. There were 7 or 8 dolphins in the pod—it’s hard to count them when they are darting back and forth in front of the hull or zipping off on a larger loop and returning to join the fun. They entertained us for about 10-12 minutes and showed us that a sailboat is no match for their graceful and effortless speed.

Partway through the third day we picked up wind again, even though the weather report said we wouldn’t have any. It was great to turn the engine off and get back to doing what sailboats are meant to do. We discovered that without the engine running the house batteries were quickly depleted. This caused the electronic instruments to be even more finicky and the refrigeration suffered, so we ran the generator almost continuously when the engine wasn’t running. The generator uses less fuel than the engine, but still we kept an eye on the fuel gauge. 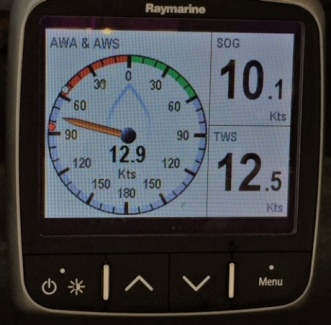 The next issue became the crossing of the Gulf Stream, which can be your friend or your worst enemy. Normally sailors plan to cross it at its narrowest point to minimize exposure to what can be very rough weather. If the wind is blowing south against the northward flowing Stream, it can be quite tempestuous. We were fortunate to have a favorable wind and were able to use the Stream like a moving sidewalk. On only 12 knots of wind we achieved the amazing speed of 10 knots, which is otherwise nearly impossible in Escapade. Because the wind, the current, and the boat were all moving in the same direction, it actually felt like we were sailing slowly and gently.

We reached Norfolk, Virginia, just inside the mouth of the Chesapeake late Friday afternoon and anchored outside Little Creek harbor to wait for Customs and Immigration to open in the morning. The storms that never materialized while we were sailing were waiting for us at Norfolk. Soon after we anchored we began to hear a roaring sound in the distance. It grew louder and louder and reminded us of tornado movies like Twister, but there were no funnel clouds, just lots of wind. Then the light show began. Broad flashes of lightning lit up the night and crackles of lightning etched jagged lines across the sky. We didn’t feel threatened but an old Christian hymn, “Will your anchor hold in the storms of life?” came to my mind. Yes, Escapade’s 99-pound Spade anchor held and we enjoyed the show.

In the morning we docked at Little Creek Marina and called Customs and Border Protection to check in. Two CBP agents and one Agriculture agent came to our boat and in the old-fashioned face-to-face method easily cleared us in without any SVRS, ROAM, or other electronic acronyms. We ate dinner at the nearby Cutty Sark Restaurant and Bar which can best be described as “authentic.” The live music was mostly 70’s and 80’s songs, which triggered a “name that tune and singer” contest at our table.

When we left Norfolk to sail up the Chesapeake to Annapolis, we discovered a new problem—the autopilot refused to work, another issue caused by the bank of house batteries failing. That doesn’t sound like much of a problem unless you’ve tried to steer a course without any fixed visual reference points. The lower Chesapeake is so wide that you think that you are still on the ocean. There is no land to be seen ahead of you or on either side of you. There is a compass, of course, but steering a boat while watching the constantly moving dial of a compass is exceedingly tedious. By day whoever was helming tried to find a cloud that wasn’t moving too fast and steered toward it. By night we could have used the stars but heavy cloud cover eliminated that possibility. So we used lighted channel markers and referred frequently to the route I had plotted on the chart plotter before we set sail.

After 24 hours of motorsailing we found ourselves in familiar territory, waiting for the draw bridge to open on Spa Creek in Annapolis, which we have always considered Escapade’s home port. It felt good to be back and a variety of water fowl welcomed us home.

We were working on cleaning the boat and packing when we started getting messages asking if we were okay. Yes, of course we were—why wouldn’t we be? We learned that a terrible shooting had just occurred in Annapolis at the Capital Gazette newspaper office, about 2 miles away from us. It was another senseless murder rampage stemming from the growing inability of Americans to manage their anger, respect life, and behave civilly. 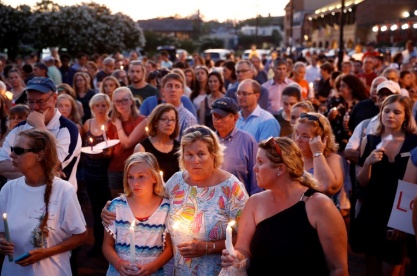 The following day we celebrated the completion of our 2018 Gringo Escapade in our traditional way by going to Chick and Ruth’s Deli on Main Street to eat crab cakes and chocolate peanut butter pie. We were still strolling by the waterfront and seeking relief from the heat when a few thousand people marched by in a solemn vigil remembering those who died and protesting the needless violence in Annapolis and in the USA. Although we fully agreed with their sentiments, we didn’t join the vigil. Somehow I felt that I would be an intruder, although that feeling doesn’t quite make sense to me now. 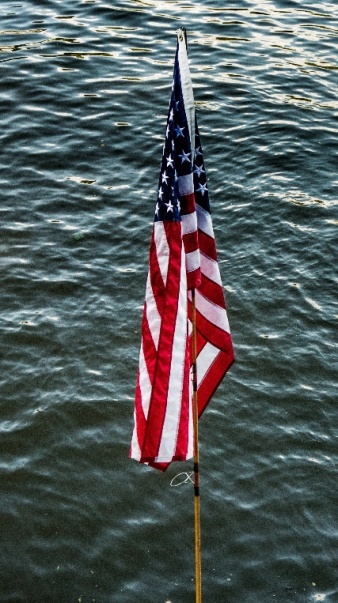 As I am writing this final chapter of the Gringo Escapades, it is Independence Day in the United States. I’m grateful to be a citizen of this great country, even with all its obvious and serious defects. The USA began as a great escapade, an adventure fraught with risk and promise. May that escapade remember its roots as the adventure continues. And may it find a true North Star to guide it through rough, confusing, and uncertain waters.