The good ship Vagamonda, a Beneteau 51 like our Mary Jewell, left St. Martin on Monday for a short sail to St. Barts. After spending a day with the beautiful people (no, we didn’t see any glitterati) we motored 30 miles on a windless day to Saba, an island fraught with difficulties due to its extremely deep water, vertical shores with no beaches, and only one small manmade harbor behind a seawall.  The people of Saba live in five villages high on the island. At 800 feet altitude we reached a spotless town of white houses and red tile roofs, ironically named Bottom.  From there we went up another thousand feet to the village of Windwardside, named for an obvious reason. This incredibly steep island was very scenic and the diving was spectacular. 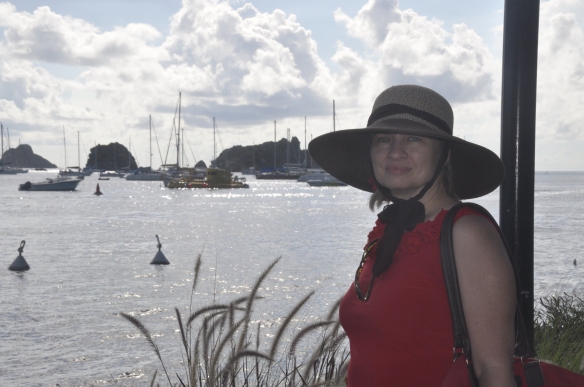 At the Carreenage in St. Barts

Next we went to St. Eustatius where we hiked up an extinct volcano and down into the crater which was covered with rain forest. After stops in St. Kitts and Nevis we arrived in Jolly Harbor, Antigua.  Antigua Race Week was going on, so we spent a day watching the races. From Shirley Heights between English Harbor and Falmouth Harbor we could see boats making mistakes that we would never make if we were racing . Down at Nelson’s Dockyard sailors, vendors, and spectators mingled, partied, and swapped stories, lies, excuses, and exaggerations.

Sailing conditions were exhilarating for the long haul from Antigua to Guadeloupe. Winds were 25 knots on the beam with gusts over 30, seas were mostly 8-10 feet with occasional 15 foot rollers, and skies were clear. With two reefs in the mainsail we covered the first 41 miles at 8-9 knots and occasionally touched 10 knots. If that wasn’t enough to write home about, big things began to happen 5 miles out of Deshaies, Guadeloupe. First the genoa halyard snapped.  The sail fell down the forestay and was whipping in the wind and water, not unlike some spinnaker problems we had witnessed in the Antigua races. We dropped the main and headed to windward.  The genoa on a cruising charter boat is heavy duty and stiff, so getting it down was a struggle, but we managed to stuff it into the forepeak cabin, the first time I ever thought that cabin was worth much except for storing empty luggage.  Then the cleat on the mast that the topping lift was secured to popped its rivets and pulled off. Down came the boom on the bimini.  That bent the frame and popped another rivet, but we used a small line to tie down the bimini frame until we could reorganize the boat and get some repairs made. Arriving in Deshaies was completely anticlimactic after all this, but we were glad to be in the harbor of this picturesque little French village.

After spending the night anchored in Deshaies harbor we motor sailed to Jacques Cousteau’s marine park at Pigeon Island where I scuba dived with a boatload of French people. The dive boat looked pretty rough, but after the first dive, they cleared off all the scuba gear from a platform on the boat and spread a pretty table cloth over it for lunch. The French take dining very seriously.

Today we set sail at 6:30 a.m. so that we could reach the Sunsail base in Marina bas du Fort, Point-a-Pitre, in time for boat repairs. It proved to be a historic occasion as we were this base’s very last customer–they are closing the base tomorrow. Sunsail’s British technician, who was holding the fort until the end, gamely climbed to the top of the mast in a bosun’s chair and installed a new halyard. While he was making this and other repairs, we were unloading garbage and upgrading our electronic capabilities, a local woman was cleaning the boat, and another woman was delivering provisions for the next two weeks. Such a beehive of activity! We will set sail tomorrow for Marie Galante or Ille des Saintes.