Escapade was on the hard at New England Boatworks near Newport, Rhode Island.  We recruited two crew to sail with us the 400 miles from Rhode Island to Hampton, Virginia, near the mouth of the Chesapeake.  We like a crew of four for sailing overnight passages so that with 3-hour watches everyone can get adequate sleep.  As the crew helped us complete preparations to sail, we kept a nervous watch on the weather.  Windy, an aptly named weather app, showed a big storm brewing south of us and heading our way.  We left Newport in less than ideal weather and headed south.  Before long, three of the four of us had thrown up, a first time to be sea sick for two of us.  Still, we saw nasty weather rolling up the coast and pressed on. 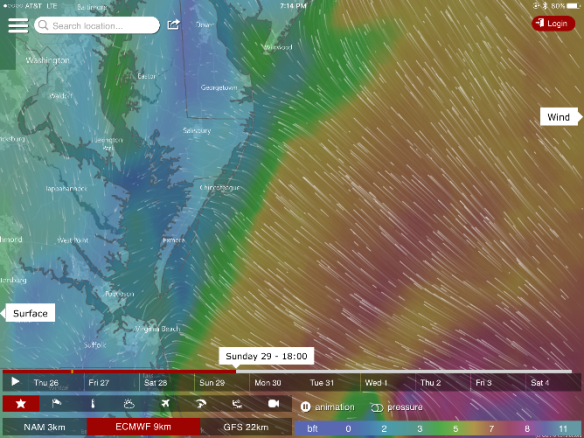 By the second day we had gotten our sea legs and just needed to put miles behind us.  We breathed a collective sigh of relief when we rounded Cape Charles and sailed over the tunnel that runs under the mouth of the Chesapeake.  We reached the Bluewater Marina at midnight, nine hours ahead of the storm.  We learned later that the storm hit Rhode Island with such fury that schools were closed for two days.

In Hampton we stayed busy repairing and preparing Escapade for the next leg of the voyage, 1500 miles to the Caribbean.  The new motor on the electric genoa furler had failed after the first day and was essential for an ocean passage.  We had a new motor expedited to us and the crew installed it.  We had discovered tears in the mainsail caused by screws that protruded into the mast.  When the sail was furled into the mast or unfurled, the screws snagged and tore the sail.  So while Doyle Sailmakers was repairing the sail, we bought two dozen 12 mm machine screws to replace the 25 mm screws that had been used to attach the upper and lower spreader brackets to the mast.  I spent a day hanging from the mast in a bosun’s chair removing the old screws and carefully installing the shorter screws, knowing that if I dropped a screw it would bounce overboard.  A $500 sail repair and $16 worth of screws corrected the problem.  Another problem was more odious, or perhaps I should say more odiferous.  The pump on the Vacuflush toilet in the aft head had failed and was oozing effluent into the bilge under the aft cabin.  Nobody wanted to spend 10 days at sea with that problem.  We were fortunate to find a man who could install a new pump and valves.  A resourceful crew who lived near Hampton repaired the Aqua Drive on the drive shaft and fabricated a spacer that we needed on the boom vang.  With a few other minor repairs, and a new round of laundry and provisioning, we were ready to sail.

Our planned departure on November 2 occurred on November 5.  We expected a 9-day or 10-day passage to BVI and had two friends from home flying to USVI on November 15 to rendezvous with us.  They were bringing more tools and supplies to work with us in putting a new roof on the church.  We had planned to have a few days cushion in the schedule, but with the late departure the cushion was gone.  We would just have to arrive in St. Thomas in 10 days without going to BVI first. 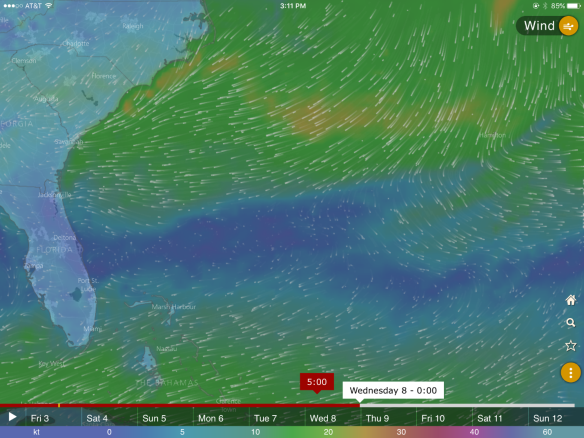 Unfortunately the Windy app showed a giant hole in the wind stretching from the coast of Florida several hundred miles to the east.  The rhumb line that we had hoped to sail to BVI would take us through several days without wind.  Escapade has an inboard diesel engine and a large fuel tank, but would it be enough to get us through the windless patch?  We calculated Escapade’s cruising range to be about 1000 miles on 220 gallons of fuel, but BVI was 1500 miles away.  And that doesn’t count fuel usage by the generator to run the refrigeration.  So we chose to sail east toward Bermuda after crossing the Gulf Stream near Cape Hatteras.  The sailing was slow, and we motorsailed frequently to keep speed from falling below 5 knots.  Later on, our standards eroded and we were content to sail if we could keep boat speed above 4 knots.

We were not far from Bermuda when the normal easterly wind resumed.  This was perfect for sailing south on a beam reach, which is our fastest point of sail.  We saw the 5 and 6 knot speeds that we had become accustomed to turn into 7’s, 8’s, and 9’s.  Finally we were sailing!  125-mile days became 200-mile days and the hope of reaching St. Thomas by November 15 became more realistic.

As our weather forecast predicted, the east wind began clocking to the south before we reached the Caribbean.  That forced us to choose between speed over ground and following the rhumb line to St. Thomas.  This is the sailor’s constant quandary–speed or direction?  Is it better to sail slower and go in a more direct line to the destination or is it better to sail faster over a longer distance?  We opted for speed as long as we were headed south.

The wind continued to veer to the south, which forced us to gradually bear off toward Puerto Rico.  If we just had a crystal ball to know what the wind was going to do another hundred miles south.  Will it continue to force us farther to the west?  Or will the normal easterly wind resume if we are patient?  Serious discussions of navigation strategy became more frequent as the wind continued to clock to the south.  Should we let it take us west so that we could finally tack on a header and sail east to USVI?

Our decision was made by the autopilot.

About 200 nm northwest of St. Thomas it had a psychotic event and started sailing us in sharp circles as shown by the track in this chart.  I was asleep but sensed something weird going on.  I jumped up to help the crew on watch get the helm under control.  The autopilot refused to behave so we had to turn it off and hand steer the boat.  That’s the normal way we sail on a lake in the daytime, so what’s the big deal?  On the ocean there are no easy points of reference to steer by as there are on a lake.  All 360 degrees look exactly the same.  And night time makes it all the more tedious to steer by watching the compass.  So we started the engine, furled the genoa, and left the main up for stability.  Since we were motoring, we changed course and headed directly toward St. Thomas.

We hand steered all night.  And then we hand steered all day.  And then we hand steered all night again.  Finally as day broke on November 15 we could see the top of St. Thomas rising over the horizon.  Seeing the destination come into sight is a happy moment, and watching an island change shape as it rises out of the sea is endlessly fascinating.  And we were going to make it on schedule!  Everyone says that a schedule is a dangerous thing to have aboard a sailboat, and I understand why that is true, but a schedule can also be a great source of satisfaction when you have made prudent decisions along the way and you arrive on schedule.  We docked at Yacht Haven Grande Marina in St. Thomas by noon and the guys arrived at 3:30 pm.  Just as we had planned!