When Escapade and her crew arrived in St. Thomas, the glamorous part of the trip was over and the down-and-dirty began.  That included doing laundry, cleaning ocean salt off the boat, refilling fuel and water, and reprovisioning for the next phase of the trip, the work at the church.  We departed St. Thomas the next day and sailed 20 miles east to Cane Garden Bay on the west end of Tortola, British Virgin Islands.

We soon began to learn that problems can be solutions if you approach them the right way.  The dinghy that we had hoped to repair in Hampton was too damaged to warrant the cost of repairing, so we had no dinghy to go ashore in.  Fortunately for us, the fuel dock in Cane Garden Bay was not being used under the present circumstances in BVI, so we were able to dock there.  Normally we would go through Customs and Immigration at Soper’s Hole, Tortola or Great Harbor, Jost Van Dyke.  Both were only an hour away from Cane Garden Bay, but both had been literally blown away by Hurricane Irma.  The only C & I office left was over 3 hours away in Road Town in an inconvenient temporary location.  Pastor Turnbull met us on the dock with another solution.  He brought a C & I officer with him and we completed all the necessary paperwork on the dock.  It has never been easier!

A tour of the church property revealed significant damage to what had been an architecturally elegant church building. 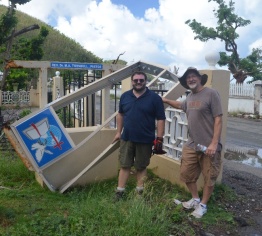 The palm tree lined walkway to the front door was obstructed with broken trees and debris.  The church’s roof was mostly intact but had a gaping hole in it.  Water had poured into the church sanctuary ruining the electronics, soaking the carpet and upholstery, and brewing the omnipresent stench of mold and mildew.  Behind the church, debris had washed down or flown down from the mountain.  Beside the main building, the church’s day care center was operating with much of its roof missing.  And in front of the church, most symbolically, the church’s sign with an emblem of the world and the cross was hanging upside down.  The church property was no worse than most of the rest of Cane Garden Bay.  The whole community had been ravaged by Irma.

The building we worked on is not the main church building,

the roof of which is much too steep for amateur roofers without proper equipment.  We worked on the day care center, a two story building with an apartment on the second floor.  When we arrived the church members had begun the work to put a new roof on the building.  The top of some of the concrete walls had literally been ripped away by the storm, so they had recast the concrete and put 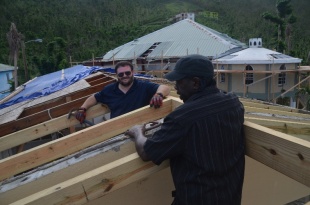 new 3x 8 rafters in place.  Some of the original roofing remained, but we had to tear off the bent metal roofing and some of the plywood and 2×4’s under it.  The church had purchased a stack of 4×8 plywood sheets, so we used those to complete the roof over the rafters.

Jeff and John had done this sort of work before and came fully prepared with power tools and carpentry skills.  They were the brains and brawn of the operation.  Larry assisted in moving the plywood to the roof and preparing the roof for the new sheets.  Diana and Elaine cleaned out the rubble from inside the building’s second floor and removed debris from the church grounds. Pastor Turnbull was on the roof working with us from time to time.

After the plywood sheeting was in place, we used seven rolls of Wind and Water Seal roofing to cover it.  This is not a product that we were familiar with.  It is essentially a 3-foot wide roll of rubber with a heat reflective cover on the top side and peel-and-stick on the bottom side, like a giant heavy roll of contact paper.  The challenge was rolling it on smoothly without bubbles, or even worse, getting the roll stuck to itself.  We were getting better with the application technique we had developed when the pastor arrived and showed us the easy way to do it.  So one half of the roof looks more professional than the other, but all of it will work.

Wind and Water Seal will keep rain out, but it is vulnerable to UV degradation, so a metal roof will have to be put over that.  The Galvalume metal had not arrived yet so we couldn’t go any further and it requires special screws which have proven difficult to acquire.  So the 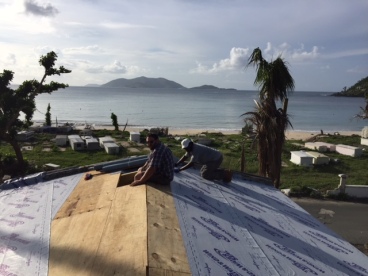 re is another phase of the roofing project that will need to be done before long.

Availability of tools and materials was sort of hit-or-miss.  In the best of times selection is rather limited in BVI, but after Irma supply was very low and demand was very high.  Diana and I brought a few hundred dollars’ worth of roofing supplies with us on Escapade.  Jeff and John left a few hundred dollars’ worth of tools that they had brought with them.  It was not surprising that the tools the church had available were not very adequate.  Diana and I sailed back to St. Thomas to buy some clean-up tools that are needed.  We went to Home Depot expecting a good array of building supplies and found that Home Depot had lost most of its roof when Irma hit St. Thomas.  It was operating in about a fourth of its usual space with a limited inventory.  We bought push brooms and rat traps there.  We didn’t see any rats at the church, but people told us that they are having to fight rats in their homes.  We went to Ace Hardware and bought flat blade shovels and mops.  On a second trip back to St. Thomas we found ceiling fans that had not been available before.

In spite of the hardships that the islanders have endured, we found the people of Cane Garden Bay Baptist Church to be very resilient and optimistic.  The worship songs were filled with thanksgiving for God’s provision and exuberantly sung.  The preaching was upbeat.  Many people who had lost homes or businesses told us that they were just thankful that they and their family were alive.  Others were grateful that they still had a job.  People we met on the street were cheerful in spite of the difficult living conditions.  At Cane Garden Bay Baptist Church faith endures.  Hope springs eternal. 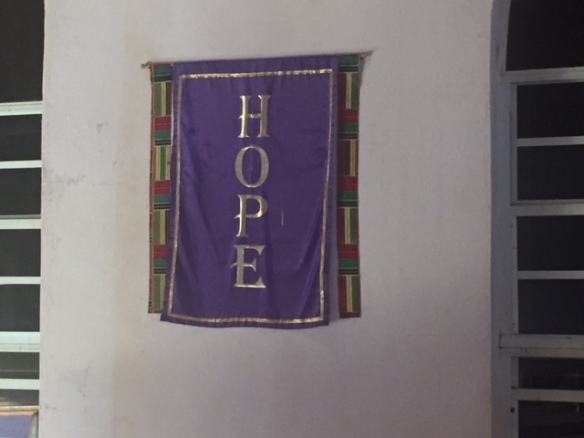 Love of the Lord is alive.