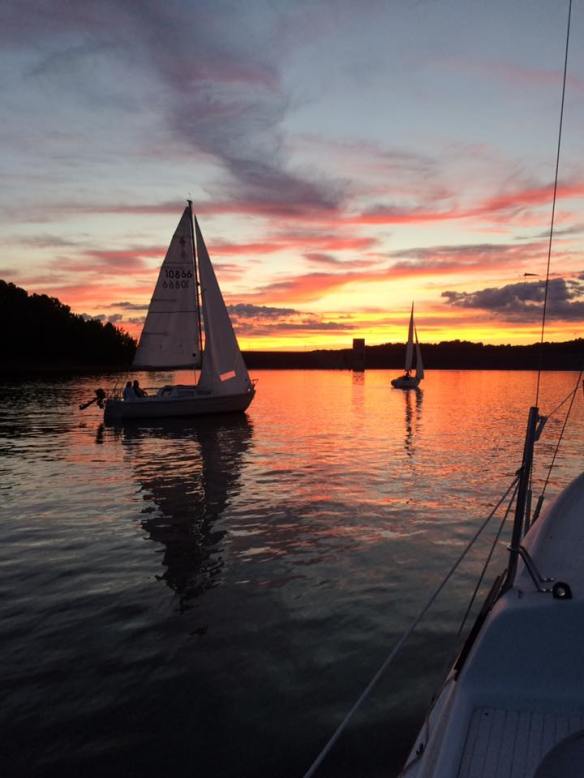 Summer solstice, as one of the more religious members observed, is celebrated with abandon at Stonehenge.  Well, we discussed mooning but there was no moon, there was, however, wind.  An exceedingly slow start  caused Kevin’s boat with a jolly crew, led by Lee Huddleston, to drift over the starting line early!  The turtle race was on!  The wind miraculously  began to ruffle the placid lake and the race around the island with the race quickly  becoming serious business.  It was a marvelous evening for the POYC regatta which had started as twice around the island due to the exceptional winds throughout the day, but had significantly diminished to whispers in the evening.

The 5 sail boats, chased one another around the island with ‘skipper’s choice’ as to which direction to sail.  The Champions took the route less traveled and showed the positive results of taking that route!  There was also a match race inside the regatta itself, as Leah and her astute tactician Carol Kersting, challenged Steve and Carol’s other half, to a match race.  The finish line told that tale, which shall be revealed  in the results!

Leah previewed the shirts commemorating the beginning of the ‘POYC next 50.’  The shirts were very popular with the attending members.  Shirts cost $20.00 with sizes for all.  Well done, Leah

Before giving the results, a major kudos to Holly and Gwen for buying and binging dinner with sides provided by other club  members.   After a day of sailing, the food was consumed by famished sailors.   Tom and Teresa Cripps joined the other day-sailors for the Solstice Regatta.  Telling tales until 8:00 pm, we set off for the shortened course.

About 90 minutes later, the race was finished.  Rob set a moving finish line between his boat and the cove’s point.  Leah and Carol remembered that Kevin was over early, so they yelled to Rob that the finish line was, therefore, on either side of his boat.  This IS about fairness, after all, they observed!  Race concluded at 11:00 pm

First Place– Kevin Klarer with the most boisterous crew!

Remember to plan to join your fellow mates for the POYC GREAT AMERICAN COOKOUT  July 2nd at 5:30 with homemade ice cream and a movie at 7:30.  Cost: $10.00/person with children under 12 free.